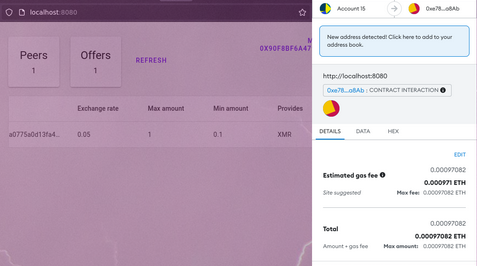 Hey, milestone 7 (UI) has been completed! The UI has integration with Metamask so users can sign and submit transactions entirely in their browser and the swap daemon doesn’t require access to an ETH private key. [..]

Note that the UI can only be run locally at this stage:

[..] hosting it on a website requires quite significant changes to the daemon, and would work much nicer packaged as a GUI.

Read the full dev report2 and consult stagenet.md14 to learn how you can join the network and try out the swap as a XMR-taker or XMR-maker.

We can expect an audit-ready pre-production release of the ETH-XMR atomic swap software next, before the mainnet launch.

A follow-up CCS proposal that could add protocol improvements such as an auxiliary Node.js client library wrapper, tor and ERC-20 token support is likely to be proposed soon by noot.

Consult the initial Monero Observer report15 to learn more about the project.

This is an ongoing story and the report will be updated when new information is available.