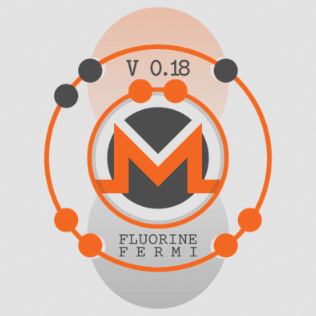 Monero’s latest major release v0.18.0.0 Fluorine Fermi1 is out2’3 and binaries for both the official CLI4 and GUI5 wallets are now available for download:

This major release is due to the August 13th network upgrade, which in turn adds support for Bulletproofs+, view tags, ring size increase to 16, and fee changes.

This [CLI] release was the direct result of 71 people who worked, largely unpaid and altruistically, to put out 420 commits containing 25749 new lines of code.

This [GUI] release was the direct result of 55 people who worked, largely unpaid and altruistically, to put out 67 commits containing 20610 new lines of code.

Contributor lists for this release are available on Github7’8. The Monero v18 graphic9 was designed by gnuteardrops from Monero Graphics10.

New binaries (CLI/GUI) can be found on the Downloads11 page on Getmonero.org.

Before installing anything users should check that the file hashes match those on the signed list, and that the signature is valid12. Guides for popular operating systems are available on Getmonero.org (Linux/Windows/Mac)13’14 and Monero Observer (Linux)15.

Note that Ledger is incompatible with v0.18 at the time of this report, but should be ready before the v15 HF.

Users are also encouraged to reach out to wallets and exchanges that have not yet been contacted (list16), notifying them of the update, before the August 13th network upgrade17. Post a comment in #69018 tagging @sethforprivacy19 to check service providers off the list.