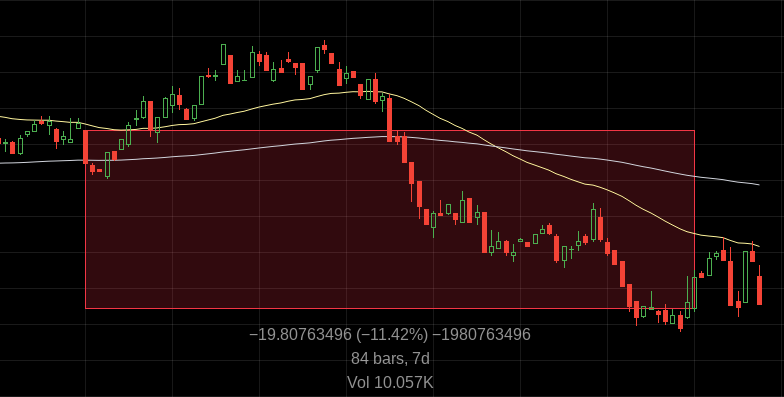 The first half of Week 7 was controlled by the bulls, but the silent bears were setting up a trap that would soon deliver a devastating blow to their opponents.

The bulls attempted to break 180 on Tuesday and Wednesday, but failed miserably. The week’s high was recorded at 183.53 on Wednesday.

On Thursday, the exhausted bulls were forced to retreat when faced with a perfectly timed bear counterattack. The bears won a decisive battle by rejecting the bulls below the daily 50 EMA.

The bear troops proceeded to relentlessly assault 160 for 3 days in a row. By Sunday, the decimated bulls had to give that territory up too and relocate to 150 support.

As I am writing this report, the bulls are struggling to stay above 150, as the bears are regrouping for another push.

The bulls are in denial at this point.

The bulls have to take 180, whatever the costs. If needed, it’s okay to temporarily retreat to 160, regroup and come back for another round. No shame in that.

They might need to defend 160 soon, unless they can produce a golden cross on the 4H and use momentum in their favor to launch another 180 assault.

Failed: the bears managed to produce a deathcross on the 4H instead.

With only 7 days left until the monthly close, the bulls absolutely have to stay above the monthly 50 exponential in the 130-140 zone.

If they manage to defend the crucial support, retake 160 and then confidently close above 190, the previously reported targets would become viable again:

The bears are in a great position right now:

If the bears can push the action below 160 and trigger several death crosses on lower time frames, they should afford to resume offensive plans:

Check/ongoing. This is exactly what happened: they easily defended 180, broke 160 on the third try and now they are planning the 135 decisive attack.

A bear victory in that area would be massive. The weekly and monthly charts are the last bull bastions. Break those supporting moving average zones and the bulls would be forced to defend 90-110 next.

On the BTC front (Poloniex XMR-BTC) the bulls are throwing everything they have at the resilient bear defense.

The bulls started the week at .004133 with a thirst for victory and with a clear purpose of producing a higher high/higher low pattern.

Although the bears kept displaying obvious signs of weakness throughout the week, the sustained bull attacks failed to deliver and the weekly high was recorded mid-week, on Wednesday, at .004213.

Bears defended the 4H EMA and kept pushing back until the weekly low was recorded at .003950 on Sunday.

The bulls are surely disappointed with the result, but there is still hope.

If the bulls can defend .0039 and return to take control of .00425, previously reported targets should be within reach:

Bears are inching closer to victory.

Check. The bears managed to defend .0042 and the daily 50 EMA is untouched.

If they can keep riding the daily RSI momentum and stop the bulls from breaking above any of the hourly resistances, the next targets should become very clear: