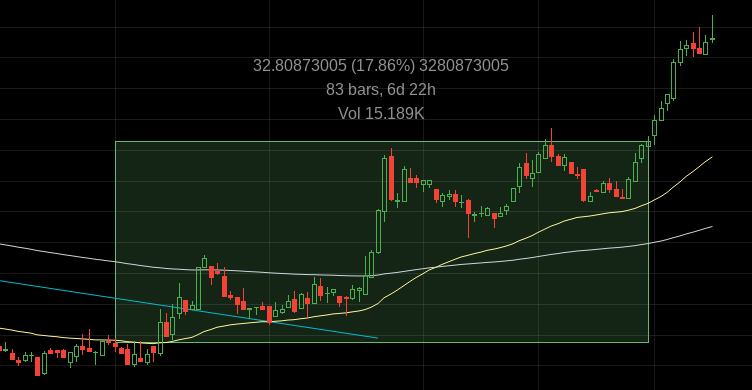 Week 51 started with a furious bull attack that almost broke the bear resistance just under 200 on Tuesday. The bulls won a well deserved crossover on the hourly before getting rejected at 198.

The bears weren’t able to push the action back inside the triangle. This opened up a new attack vector to be exploited by the bulls. On Thursday they did just that with another blitz attack that almost pierced the 200 EMA on the 4H chart.

On Saturday the bulls pushed once more and printed the weekly high at 218.57. Bears were helpless all week and obviously no match for the bull frenzy.

The fourth assault was on the very last day of the week. The bulls showed no mercy. Only one thing stopped the bulls from closing higher than 216.48: the bell.

As I am writing this report, the bulls are still in total control: they are orchestrating another push deep inside enemy territory around 230.

Bulls finally managed to break 200 with a series of rather convincing attacks.

The small triangle breakout has put the bulls in a good position now, as previously reported:

If they can maintain the higher high/higher low bullish structure and cascade moving average crossovers from the 1H/2H to the 4H+, the bulls should soon get a chance to test 250.

A close above that important level could also lead to a death cross reversal on the daily and a bullish hammer on the monthly. That would be an amazing way to end the year and could also mean we get to see fights above the 300 level in January.

The bears have to be disappointed with their performance. Although they were very close to taking 180 four weeks in a row, the number of wasted opportunities finally got to them.

But all is not lost, as we are still in bear territory.

The bears should definitely take the fight and engage with everything they can if the bulls dare attack 250. That’s an important level to be defending. The bulls will need to flip that resistance in order to mount 300 attacks in the near future.

If the bears can reject the ongoing bull attack and keep the action below the weekly 50 EMA (under 235~), they might be presented with a counter-attack opportunity this week that could take them back to retest 200-210.

Break that to create a wave failure and expose 180 again. Not easy, but possible.

On the BTC front (Poloniex XMR-BTC) the bulls are finally starting to push back.

Not only did they fail miserably, but the bulls managed to grab an important victory on Thursday that ended with a triangle breakout and printed the week’s high at .004411.

The bears responded promptly with an impressive 10% rejection the very next day that pushed the action back inside the triangle, but only barely (to .00398~).

However, the bulls were having none of it: they were tired of defending and decided to switch to gung-ho mode immediately after the weekend started. That lead to a golden cross on the 3H. It’s impressive because the last time that happened was in August.

The bulls are starting to develop a helpful narrative, as previously reported:

A higher high & higher low pattern would allow the bulls to close above .0043 and could take them all the way to .0048.

The bears have failed to defend key zones and are now forced to defend:

Fortunately for them, months and years of hard bearish work will be hard to undo by a single bull victory.