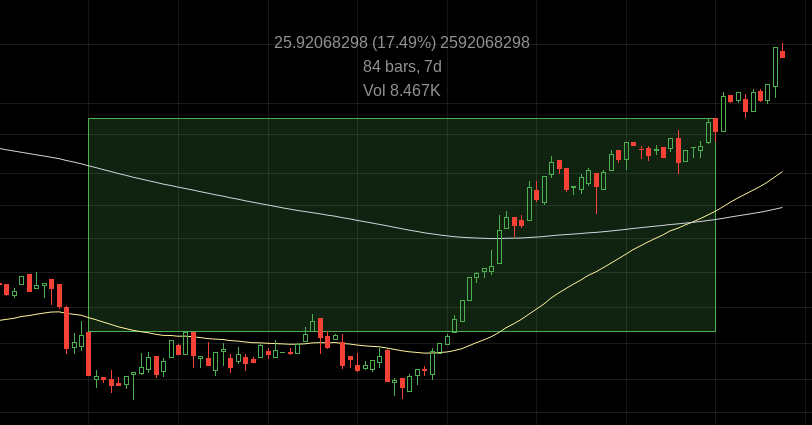 The first half of Week 5 was dominated by uncertainty. Both bears and bulls were looking exhausted and unable to build any kind of significant moves.

Unfortunately for the bears, their efforts were simply not good enough to close the January candle below the monthly 50 EMA.

On Thursday the bulls easily defended 140 for the second time and it was clear at this point that the bears were just bluffing, stalling until reinforcements arrive.

Friday was marked by the bullish flippening of 150 and the start of a vicious counterattack that was destined to break 160.

The bears rushed to defend the 200 exponential on the 4H and the crucial 180 level. It was the bell that temporarily stopped the bulls at 173.54, concluding the week with a powerful +17.36% result.

As I am writing this report, the bulls are under heavy fire around 180, very near the daily 50 EMA.

The bulls are fully awake right now. They have successfully flipped 160, as previously reported:

If they can take advantage of the cocky bears and the RSI divergences on several charts, they should be able to target 160 soon.

After that the bulls have to flip 180 in order to reactivate offensive plans in the 200-240 range.

The bulls have to take 180, whatever the costs. If needed, it’s okay to temporarily retreat to 160, regroup and come back for another round. No shame in that.

If victorious, just stay above that key level long enough to prepare a 200 assault and then make plans for 220-230.

A convincing close above 250 would be a very significant result that would open up a direct route to 300.

The bears need to psychologically stabilize.

Yes, they did fail their main objective:

If the bears can close below the monthly 50 EMA, 95-120 territory should be their next target.

And then this happened, as reported:

But if they fail and can’t pierce the monthly 50 EMA, they will probably be forced to retreat and defend 180-200 instead.

But this was to be expected.

The bears need to realize that not all is yet lost as we are still in a downward corrective structure: in bear territory.

A solid defense of 180 would actually be very bad for the bulls, so that should be top priority.

That would give them an opportunity to retake 160 and keep the pressure on the bulls. Using RSI divergences to time intelligent counterattacks would make 135-140 viable targets once more.

Whatever happens, bears should not concede 230.

On the BTC front (Poloniex XMR-BTC) the bears are running out of steam but bulls are barely hanging on.

The first 48 hours were very scary for the defending bulls. The bears forced the action to sub-.0037 levels.

On Tuesday the bulls were almost ready to give up as the bears printed the weekly low at .003721.

Fortunately for the bulls, that was the last hurrah. The bears ran out of manpower.

The counterattack was spectacular and produced a ~13% rally that culminated on Friday and topped at .004208. This was the week’s high.

That’s the last time they managed to produce a golden cross on the 2H.

That’s pretty much what happened, although the bulls were playing with fire by briefly allowing bears in the danger zone at the beginning of the week.

Best case scenario is the former (a close above .0041), which would open up previously reported targets [..]

Targets are the same:

Bears came close to a breakthrough, but now they need to defend.

Failed, but they did manage to advance deep into bull territory that was last touched in March 2021. That’s something.

It probably won’t be easy, but if they are victorious, we could see sub-.003 action soon.