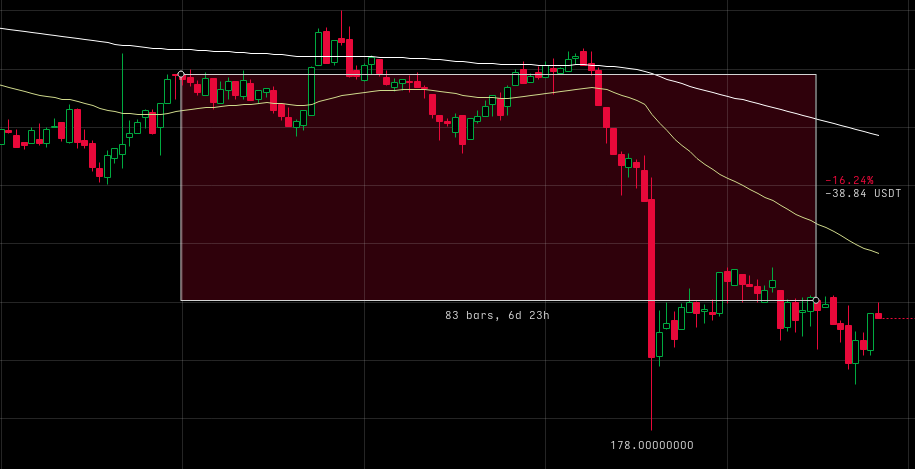 Week 48 started with a bull attack under the 4H 200 EMA, but that looked more like dry run as they barely managed to touch the 250 resistance once.

On Wednesday, the bears flashed a deathcross on the daily. This was a bad omen for the bulls.

They did, however, get another chance to create a higher high on Friday, but failed. That was the final nail in the coffin as bears were just about ready to furiously strike back.

The counter-attack was devastating and the weekly 50 EMA didn’t hold this time. Within 24 hours the bulls were forced to retreat all the way to 180. This is the fortress captured by bulls in February. The bears last attempted to take it back in July.

Luckily the key support did hold as fleeing bulls connected with reinforcements on Saturday. The zealous bears did overextend a bit and were forced to retreat at previously captured 200. That’s exactly where the action closed, a -16% result.

As I am writing this report, the bulls are struggling to reverse some of the damage by testing the bear resistance at the hourly 50 EMA.

The bulls failed to achieve their number one objective last week:

The bulls need to prevent the daily deathcross that’s currently looming in the air.

That alone has put them in a world of trouble.

The daily RSI is entering oversold territory and that might be a chance for them to get back in the fight.

If they can keep the action away from the danger zone (180) and use divergences on lower timeframes to their advantage, they should get another chance at 220. That’s also the .618 fibs. A victory there would put 245-250 on the map again.

The bears accomplished both objectives for the previous week:

If they can stop the bulls from further developing their HH/HL micro pattern just below 250, a close under 210 is not out of the question.

A move with enough volume behind it might see the bears knocking on the gates of the 180 bull fortress next.

That’s exactly what happened: they touched 178.00.

I wouldn’t be surprised if a break of that level would see the bears striking the weekly 200 exponential moving average at 145-150 next.

On the BTC front (Poloniex XMR-BTC) the action was very erratic all week and the results inconclusive.

The week started at .004169 with bulls sieging .0043. This was essentially a continuation of previous week’s campaign.

The bears managed to successfully defend the 4H 200 EMA again by rejecting repeated attacks on Tuesday, Friday and Saturday.

The bulls have to keep fighting. It is a war of attrition, but the bears aren’t invincible. A MACD crossover on the weekly is in the making. If they can stay active until that happens, it could be the turning point on this front.

As previously reported, if bulls could finally take .0043:

Bears should prepare whatever energy they have left for a final push to break .0039. If they can force the daily MACD to cross to the negative side, the momentum should be in their favour.

Next time, if they manage a strong close under .0039, they should keep the action under that price if they want to make a play for .0034 this year.