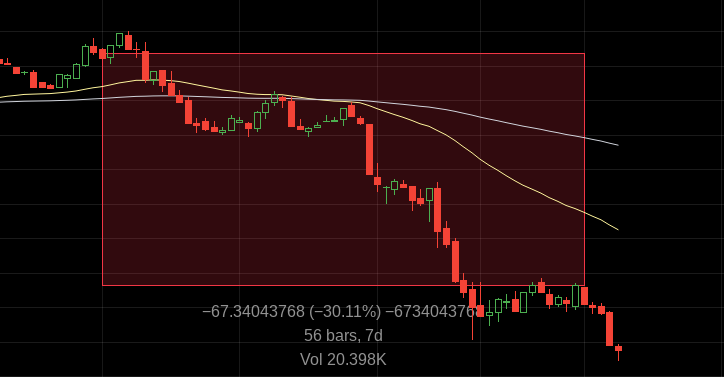 Week 3 started with a small bull attack around 230 that got rejected easily.

By Tuesday the bears were in full control of the action.

The bulls rushed to defend the psychological 200 level and did their best to reinforce the support until Thursday.

Deathcrosses started to cascade from the hourly all the way to the 4H. A predictable bull force retreated to the battle-tested 180 long-term support.

However, the bears were already expecting that move and this time they weren’t going to back down.

The weekend was disastruous for the bulls. Not only did they lose 180, but were forced to defend 150 until the last bell.

As I am writing this report, the bears are pushing their luck, probing deep into enemy territory around 140.

The bulls did screw up, big time.

Provided that works out as planned, they have to commit to a 250 victory (a close above 255 more specifically) if they don’t want to scrap 300 plans.

Failed. No longer a priority.

The bulls have to come up with a counter-attack but the timing must be perfect.

If they can take advantage of the cocky bears and the RSI divergences on several charts, they should be able to target 160 soon.

After that the bulls have to flip 180 in order to reactivate offensive plans in the 200-240 range.

The bears deserve the credit.

After repeated attacks, they finally made it:

As long as bulls are not allowed to escape the descending triangle with a close above 255, they will probably get another shot at a counter-attack targetting 200-215. Break that to expose 180 again.

Push fast and hard and the bulls will probably retreat to defend the vital 150 support.

Done. And this time, 180 did break and the bulls aren’t looking strong enough to defend 150 at this point.

If the bears can close below the monthly 50 EMA, 95-120 territory should be their next target.

The area should be tough to crack, but not impossible. Win there to enable 2-digit skirmishes and a path to the 45 bull fortress.

On the BTC front (Poloniex XMR-BTC) the bulls are losing steam fast.

The week started at .005207 with a bull attack aimed at .0054 that quickly turned into a bear counter-attack by Tuesday.

The bulls had to give up .005 for good mid-week, when it was very clear to everyone that the bears meant business.

On Saturday the bears took .0046 easily after a 2H deathcross.

The bulls are still in it.

Previously reported objectives were not accomplished:

If the bulls can construct and ride the next impulse wave, a close above .0054 would expose .006.

Close, but no cigar.

However, if they can stop the bears from pushing the action below .004, they should get a chance to strike back.

Whatever happens, the bears should not be allowed to play around the .0038 danger zone.

Bears are showing signs of redemption.

They have literally passed all tests:

They have to stop the bulls from reversing the daily deathcross that has been in effect since August 2021.